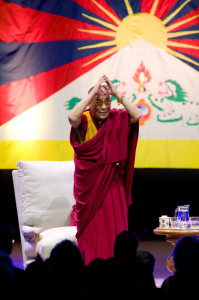 The Dalai Lama is the pre­-eminent representative of the Tibetan people and a globally respected icon of peace.

Tenzin Gyatso, the 14th Dalai Lama, was born in north ­eastern Tibet in 1935. When he was three years old he was chosen as the reincarnation of the 13th Dalai Lama, who had died four years earlier. In 1950, aged 15, he took the throne as the temporal leader of Tibet – just as the Chinese armies invaded. Nine years later he escaped, and settled in Dharamsala in northern India where he established a government in exile.

Since fleeing Tibet he has dedicated himself to campaigning internationally for his exiled homeland, but always stressing the need for non-­violence – a stance which won him the Nobel Peace Prize in 1989. 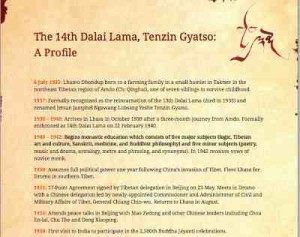 Public display of his image has been banned in Tibet for decades, but Beijing’s slanderous attacks over the years have not affected the loyalty and love Tibetans in Tibet have for the Dalai Lama, nor their deeply held desire for him to return home.