“I have done nothing against the law. I am wrongly accused. To prove my innocence I appeal to all for your support.” 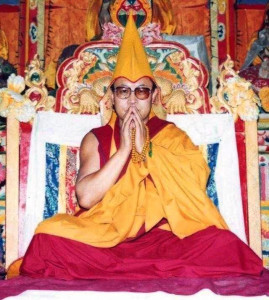 On this day, United Nations International day in support of Victims of Torture, take action for revered Tibetan buddhist lama Tenzin Delek Rinpoche, (right) who has been in prison for 13 years for a crime he did not commit. Arrested in April 2002 and sentenced, initially to death with a two year reprieve for “crimes of terror and incitement of separatism”, Tenzin Delek responded “I have always taught people that one should not harm any life, not even that of an ant, how could I then possibly be responsible for such an action?”

Tenzin Delek Rinpoche was recognised as a reincarnated Tibetan lama by the Dalai Lama, who also gave him his name. After studying in India, he found himself under Chinese scrutiny when he returned to Tibet in 1987 and became a highly respected community leader and advocate of Tibetan identity and culture. He built seven monasteries, oversaw the the construction of an old people’s home, a school for orphans and children from poor families and spoke out in defence of Tibet’s fragile environment.