His Holiness the Dalai Lama, the spiritual leader of the Tibetan people and the inspiration of my life’s work, remains a towering figure on the world stage. His message of peace, and emphasis on values of compassion and tolerance, have never mattered more in a world in which moral leadership is in scarce supply. 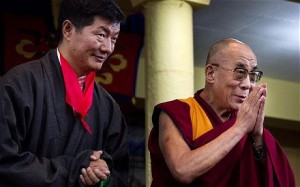 Lobsang Sangay, Sikyong of Tibet’s government in exile, stands next to the Dalai Lama at his swearing-in ceremony in Dharmsala, India, 2011. © Associated Press

Dr Lobsang Sangay was elected by exiled Tibetans as Political Leader of the Central Tibetan Administration (CTA) in March 2011.

A Harvard University academic, Dr Sangay took on the political role previously played by the Dalai Lama, who devolved his political power devolving his political authority to the democratically elected leadership of the CTA.