The support and assistance India has given Tibet for more than two thousand years, but particularly over the last fifty years is incalculable. Words are insufficient to repay the debt we owe India.

In March 1959, the Dalai Lama was forced to escape from Tibet, when China brutally crushed  popular uprisings against its occupying forces. In exile, His Holiness found freedom in exile, and with the many thousands of Tibetans who left their country in the immediate aftermath of the 1959 uprisings, was able to establish a thriving diaspora, supported by democratic institutions. At the conclusion of a year-long “Thank You India” programme, to mark the 50th anniversary of his escape, His Holiness said: 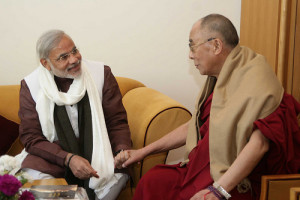 “On a personal level, the freedom I enjoy in exile I owe to India. I am able to practise Buddha Shakyamuni’s teachings, on the basis of which I try to make some contribution to the betterment of humanity. The liberty I enjoy in India is truly reflected in the title of my autobiography – Freedom in Exile. It is a great honour for me to consider India my spiritual home and like a messenger I have tried to promote the key Indian principles of ahimsa (non-violence) and karuna (compassion) wherever I go…On behalf of all Tibetans, both those inside and those outside Tibet, I fervently wish to express our profound gratitude by saying Thank You over and over again to you, the people and government of India.”