If you think you are too small to make a difference, try sleeping with a mosquito

Despite the rising power and influence of China, and increasing inclination of foreign governments to err on the side of political expediency when asked to challenge China’s policies in Tibet, the ‘mosquito’ grassroots Tibet movement has had many campaign successes. Below is a digital presentation of some of the Tibet campaign movement’s most high profile victories to celebrate its achievements, reinforce the importance of excellent strategies and tactics, and enhance institutional memory. 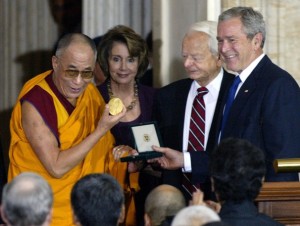 A notable example is the campaign to award the 2007 US Congressional Gold Medal to His Holiness the Dalai Lama (right). In the overwhelming majority of cases, the key to success was collaboration, with multiple Tibet Groups working together to maximize reach and influence – sometimes working in tandem, sometimes pursuing complementary strategies. Over the years, Tibet Groups have tackled a wide range of targets – from China itself, to companies, banks, governments, the UN, international NGOs, academic groups and the law courts – and utilised an incredible diversity of tactics, showing the movement’s enormous versatility despite its modest resources.