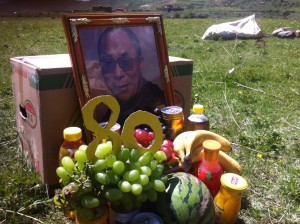 Since the official celebrations for His Holiness’ 80th birthday took place in Dharamsala on 21 and 22 June, social media has been flooded with images of Tibetans in Tibet marking the Dalai Lama’s birthday in a variety of ways – see right and below, posted by Lhase Sonam and the slideshow shared by Free Tibet.

Radio Free Asia reported that Tibetans in a number of areas of Tibet celebrated in spite of warnings and bans from Chinese authorities. Gatherings were held publicly and privately, and the images shared with the exile community show offerings, incense burnings and prayer ceremonies, photos, banners and fireworks. Monks can be seen chanting and singing. 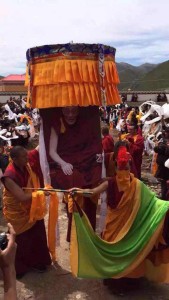 Radio Free Asia wrote “The celebrations came as Chinese authorities tightened restrictions across Tibetan-populated regions in advance of the Dalai Lama’s July 6 birthday, posting warnings against celebrations of the politically sensitive event and blocking public gatherings that could be linked to it.”

China has reacted harshly to actions to mark His Holiness’ birthday in the past. As reported by International Campaign for Tibet “In 2013, two Tibetans were shot in the head and at least eight others seriously injured after police opened fire at unarmed Tibetans who had gathered for a picnic and to offer prayers at a sacred mountain in Nyitso, Tawu, Kardze on July 6. Two years before, in 2011, security personnel had been deployed at the same location as the shooting in Tawu to prevent peaceful celebrations of the Dalai Lama’s birthday, and thousands of Tibetans were stopped from making offerings at a holy mountain during the early hours of the Dalai Lama’s birthday. Even so, images emerged depicting plumes of incense smoke, burnt as an offering for the well being of the Dalai Lama, arising from houses on a hillside in the area on the birthday of the exiled religious leader that year.”