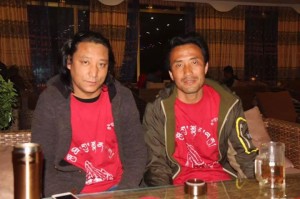 The remarkable photo (courtesy of PEN Tibetan) on this page shows two recently-released Tibetan resistance writers – Tashi Rabten and Kelsang Tsultrim – wearing T-shirts that read ‘Greetings on the 80th birthday’ to His Holiness.

Tashi Rabten (left), pen name The’urang, was a student at the Northwest Nationalities University and the editor of banned literary magazine Eastern Snow Mountain (Shar Dungri). He was detained in April 2010 and received a four-year prison sentence on 2 June 2011 for writing about the situation in Tibet following the 2008 unrest and subsequent crackdown. Tashi Rabten and his fellow editors wrote in the introduction that it was “a sketch of history written in the blood of a generation”. He was released in April 2014.

Kelsang Tsultrim (top right), an intellectual buddhist monk and writer, made a series of remarkable videos in 2009 about the situation in Tibet, and his fears for the survival of Tibetan religion and culture. (See below for some extracts). In one message Kelsang Tsultrim spoke with great emotion about the importance of the Dalai Lama returning home: “His Holiness the Dalai Lama is very famous in the world today, everyone respects and honours him. But he is 74 years old now. He must miss his homeland very much because, when people become old, they miss home just as when birds get old, they want to return to their nests. Every Tibetan is hoping for His Holiness the Dalai Lama to return to Tibet and negotiate with the Chinese leadership in peace. That is the only wish of every Tibetan.”  These videos earned Kelsang Tsultrim a four year prison sentence.

On 14 June 2015, International Campaign for Tibet published a new report “The Teeth of the Storm” that documents the cases of 11 imprisoned writers and intellectuals and 10 singers who have faced persecution and imprisonment in Tibet.