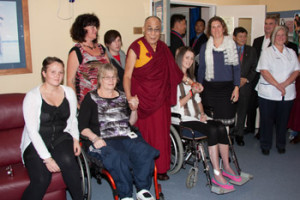 His Holiness the Dalai Lama at Christchurch Hospital on June 8, 2011, with victims of the February’s earthquake.

Friends of Tibet New Zealand was formed in 1986, when some friends in Auckland got together to discuss the possibility of inviting the Dalai Lama to visit New Zealand. Since then the group has gone from strength to strength, taking a leading role in the three visits of His Holiness to New Zealand and playing a key role in establishing a Parliamentary support group in March 1994. During the Dalai Lama’s visits to New Zealand he has met with Government leaders and, in 2001, visited Christchurch in the aftermath of the earthquake.

Today Friends of Tibet (NZ) has members across the country and continues to grow and is active in numerous ways including raising awareness of the Tibetan issue, supporting His Holiness the Dalai Lama’s initiatives to open constructive dialogue between China and the Dalai Lama’s representatives, lobbying the New Zealand Government to change its foreign policy on Tibet, and supporting Tibetan refugees in India

Tibetans in exile all over the world are gearing up for big celebrations in July for His Holiness’ 80th birthday. The Auckland Tibetan community will be holding a special day on Saturday 4th July, to celebrate the 80th Birthday.