While I and my government did not voluntarily accept the [17 Point] Agreement, we were obliged to acquiesce to it and decided to abide by the terms and conditions in order to save my people and country from the danger of total destruction. It was, however, clear from the very beginning that the Chinese had no intention of carrying out the Agreement.

On 23 May 1951, in the aftermath of China’s military invasion of Tibet, the so-called “17 Point Agreement” was signed, but it was abrogated by the Tibetans in 1959 after numerous breaches by the Chinese government. 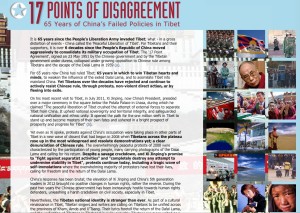 When the Dalai Lama escaped from Tibet in March 1959, following a brutal military crackdown on the Tibetan National Uprising, one of his first acts was to denounce the 17 Point Agreement. At a press conference in India on 20 June 1959, he said the Agreement had been signed under duress and that the Chinese authorities had not adhered to the conditions (see quote above)

International Tibet Network has created a website – www.17pointsofdisagreement.org – detailing 17 examples of where China’s Tibet policies have demonstrably and entirely failed.

The full text of the 17 Point Agreement can be viewed on the website of Tibet Justice Center.