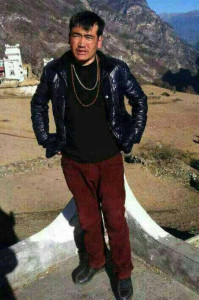 On 20 May a 35 year old Tibetan man, Tenzin Gyatso (right), set light to himself in Tawu, eastern Tibet, apparently in protest at the build-up of armed police in the area, intended to deter locals from celebrating the Dalai Lama’s forthcoming 80th birthday. It is not known whether he survived or has died. He is the 140th Tibetan to have self-immolated in Tibet and the China since 2009.

International Campaign for Tibet quoted a Tibetan in contact with sources in the area, who said: “It is believed that the tight security and oppressive atmosphere in the Tawu area in the last few days triggered Tenzin Gyatso’s self-immolation protest. Recently, the Chinese authorities deployed an intensified presence of heavily armed troops in the area, and carried ou 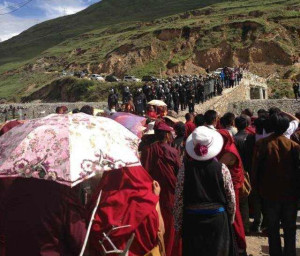 t military drills to intimidate people. We have heard many people are being beaten and detained for no reason. Tenzin Gyatso witnessed this happening and was distressed about it.”

In 2013 at least 10 Tibetans were injured when People’s Armed Police opened fire on a 6 July picnic in Tawu to mark His Holiness’ birthday (see image left of security forces confronting local people). In 2011, security forces also attempted to prevent Tibatans in Tawu gathering to celebrate the Dalai Lama’s birthday (see video below).