Today is Earth Day, an annual event to demonstrate support for environmental protection. His Holiness has spoken many times of his concern for the environment, and the rapidly changing climate and increased natural disasters.

On many occasions the Dalai Lama has discussed the urgent need to take care of the environment as a matter of human survival; “We have to take ecology seriously. Although the climate does change naturally, the rate and extent of recent change is an evident result of human activity. We need to learn more about this and what we can do about it.” 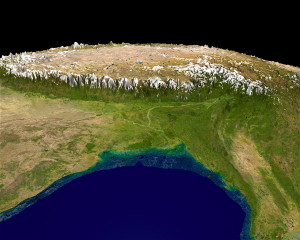 Tibet itself is particularly vital in this need to take care of the environment. Tibet is often called the ‘Earth’s Third Pole’ due to the 40,000 glaciers, storing more freshwater than any other region except the North and South poles.

Since invading and occupying Tibet in 1949, China’s policies of mining, urbanization and infrastructure development have aggravated the environmental degradation that is affecting the quantity and quality of Tibet’s grasslands and water resources. These policies may also be accelerating warming of the plateau.

In December 2015, governments of the world will come together in France for the 21st Conference of the Parties (COP), seeking a new and binding agreement on cutting greenhouse gas emissions. Tibet campaigners will also be there to highlight the human and environmental threats to the Third Pole, and China’s mismanagement of Asia’s precious water resources.

Read more about His Holiness’ messages about the environment