Because we all share this planet earth, we have to learn to live in harmony and peace with each other and with nature. This is not just a dream, but a necessity.

China’s policies are endangering the Roof of the World: as the largest repository of snow and ice outside the north and south poles, Tibet is the earth’s third pole and the source of Asia’s major rivers.  In a perilous age of global climate change, the Tibetan people want to reclaim stewardship of their land before it’s too late, for Tibet, China and the rest of Asia. 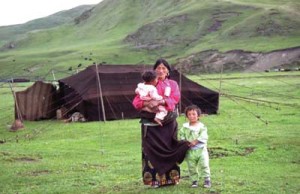 For centuries Tibetan nomads have protected the grasslands by making a sustainable living uniquely adapted to the harsh conditions of the Tibetan plateau. Now China is removing nomads from the land and settling them in towns, thereby imperiling their livelihoods and their culture, and threatening the survival of the rangelands on the roof of the world. This is leading to increased desertification and exacerbating the impact of global warming. In this age of climate change, Tibetans and their centuries-old knowledge of the Tibetan environment need to be involved in all aspects of restoration and stewardship of the ecosystems and ecosystem services of the Tibetan Plateau.

In 2012 His Holiness the 14th Dalai Lama spoke out against China’s forced nomad resettlement. In a rare audience with Tibetans from Tibet, the Dalai Lama urged China’s leaders to “instead of forcefully resettling them, building of hospitals and schools for the nomads around their grazing areas would be more constructive.”

On 30 May 2015, Tibetan Centre for Human Rights and Democracy published a new report “Wasted Lives, China’s Campaign to End Tibetan Nomadic Lifeways”. Read the report here and watch the accompanying video below.

[Photo top left by Daniel Miller and on home page by International Campaign for Tibet.]