The Dalai Lama and the Beastie Boy

In 1996 around 100,000 people gathered in San Francisco for the first of a series of events that would take the Tibet issue to huge new audiences – the Tibetan Freedom Concerts. 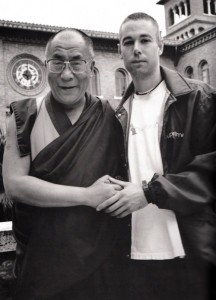 The concerts were the brainchild of Adam Yauch – aka MCA – and activist Erin Potts, who also co-founded the Milarepa Fund. There were nine concerts in eight cities around the world between 1996 and 2000, in which Yauch’s band The Beastie Boys were joined by many popular artists such as Red Hot Chili Peppers, Björk, Smashing Pumpkins, Cibo Matto, Rage Against the Machine, De La Soul, Radiohead, Tracy Chapman and Pearl Jam, all doing their part to raise awareness of the Tibet issue.

Adam Yauch’s interest in Tibet was sparked by encountering Tibetan refugees whilst trekking in Nepal. In 1993 he briefly met the Dalai Lama, later saying “I happened to catch him when he was walking out of a room. It was wild. He grabbed both of my hands and looked at me for a second and I felt all this energy. I just walked to my room and it clicked in my head. I thought, I need to write a song about this.” Yauch became a Buddhist three years later.

In 2012, Adam Yauch died at the age of just 47; a great loss to the entire music world, let alone the Tibet movement. A spokesperson for the Dalai Lama said “Adam had helped us raise awareness on the plight of the Tibetan people by organizing various freedom Tibet concerts, and he will be remembered by His Holiness and the Tibetan people.” In tribute, MCA Day has become an annual event, this year taking place in Brooklyn in August.

Watch below the Beastie Boys perform at the Tibetan Freedom Concert in 1999, and Tibetan ‘monks’ breakdance in New York to promote the first MCA Day in 2014.