His Holiness the Dalai Lama continues to be one such figure who sheds the illuminating light to the path of non-violence, freedom, peace and justice 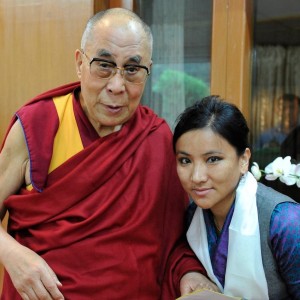 Tenzin Dhardon Sharling is Chair of International Tibet Network, a coalition of 180 Tibet Groups around the globe, working together to create more effective and impactful campaigns, and maximise the effectiveness of the worldwide Tibet movement.

International Tibet Network, founded in 2000, is governed by a 20-person Steering Committee, elected by and representing Member Groups across the globe. Network Members are committed to non-violence as a fundamental principle of the Tibetan struggle. They regard Tibet as an occupied country and recognise the Tibetan Government in Exile as the sole legitimate government of the Tibetan people. Beyond these principles, the International Tibet Network respects the variety of views and opinions of its Member organisations, for example concerning Tibet’s future political status, and believes that diversity strengthens our movement.

Dhardon Sharling is also a Member of the Tibetan Parliament and among her many roles in the Tibet movement she is a former media officer for Tibetan Women’s Association. She is currently embarked on a course of study in the United States.