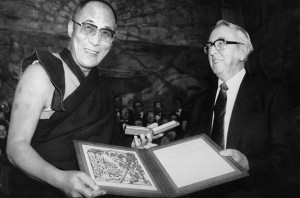 His Holiness the Dalai Lama has been awarded over 150 Honours and Awards.

In 1989 the 14th Dalai Lama received the Nobel Prize for Peace. The Norwegian Nobel Committee awarded the Prize to His Holiness, “to emphasize the fact that the Dalai Lama in his struggle for the liberation of Tibet consistently has opposed the use of violence. He has instead advocated peaceful solutions based upon tolerance and mutual respect in order to preserve the historical and cultural heritage of his people.”

On receiving the award the Dalai Lama said “I feel honored, humbled and deeply moved that you should give this important prize to a simple monk from Tibet I am no one special. But I believe the prize is a recognition of the true value of altruism, love, compassion and non-violence which I try to practice.”

The Dalai Lama has received many similarly prestigious awards including the U.S. Congressional Gold Medal, the Templeton Prize and numerous Honorary Degrees and Citizenships. 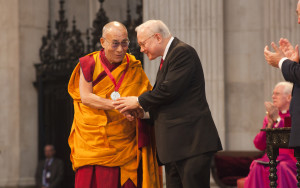 Peace does not mean an absence of conflicts; differences will always be there. Peace means solving these differences through peaceful means; through dialogue, education, knowledge; and through humane ways.