In March 2008, Dhondup Wangchen was arrested for filming the views of ordinary Tibetans on a range of issues, including their desire for His Holiness to be able to return to Tibet. He was imprisoned for six years. Friends and family in exile, working as Filming for Tibet, turned Dhondup’s footage into the the powerful film Leaving Fear Behind 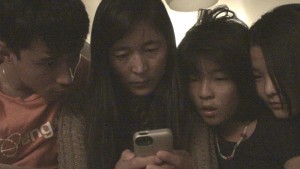 , and campaigned tirelessly for his sentence to be overturned. One year ago, on 5 June 2014, Dhondup was released from prison. Family and friends report that he remains in Tibet, in poor health, with his movements and communications restricted.

Dhondup is still parted from his family (right). His wife, Lhamo Tso, an eloquent advocate for her husband, was granted asylum in the United States in 2013 with the support of Bay Area Friends of Tibet, who arranged legal assistance and helped with housing, translation services, job referrals and references. They and many other Tibet Groups continue to campaign for Dhondup Wangchen to be reunited with Lhamo Tso and their family.

Last week Lhamo Tso said “I, as well as his aged parents, had hoped that Dhondup Wangchen’s release from prison would bring our family closer together again. But this year has been just as hard as the previous years as we are still separated. My children and I are incredibly frustrated that their father hasn’t been allowed to join us in USA.”

Golog Jigme, a Tibetan monk who helped Dhondup with his filming, was detained and persecuted in Tibet but eventually made it safely to exile. He now lives in Switzerland and recently took part in the Olympics protest in Lausanne.

In the video clip from “Leaving Fear Behind” below, Dhondup Wangchen explains his actions.