I believe in justice and truth, without which there would be no basis for human hope.

Today is the opening of the 29th session of the United Nations Human Rights Council in Geneva. The importance of amplifying the truth has led TJC to engage over many decades at the UN, presenting an accurate picture of the human rights violations carried out in Tibet by the Chinese government. Tibet Justice Center seeks to challenge China’s own version of the 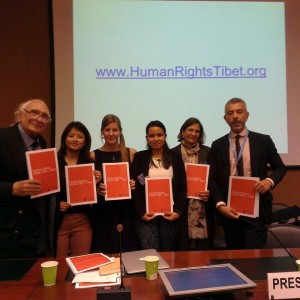 truth and press the international community to hold China accountable for its actions in Tibet. For the last two years TJC has been working at the UN as part of a coalition of Tibet groups, and alongside others lobby hard to create a stronger, unified message and thus a louder voice for Tibet at the UN.

Another key example of Tibet Justice Center’s work is a 1998 paper that shows Tibet was an independent country prior to 1950, and that the Tibetans as a people have the right to self-determination i.e. the right to choose for themselves their own form of governance, which is the first right mentioned in both international human rights covenants.

TJC also carries out research in India and Nepal to look at how national laws and policies are affecting Tibetan refugees, identifying issues that will assist asylum lawyers in supporting their Tibetan clients. TJC is excited to be working with Tibetan Legal Association – a group of Tibetan lawyers in India – who seek to provide legal aid and training to Tibetans in India.

As His Holiness turns 80, Tibet Justice Center continues to be inspired by his passion, integrity and tenacity. He inspires us to work from the heart, using the law and working with others. After all, we have truth, we have hope and one day there will be justice for Tibet.