The Dalai Lama and Sport 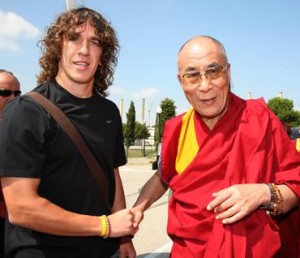 When asked “Which is your favourite sport?” in the video clip below, His Holiness replies, “I think almost zero”, but goes on to describe playing ping pong with Chinese Premier Zhou Enlai in the 1950s, trying badminton in exile, and finally admitting to enjoying cricket and football (see right, His Holiness meeting Barcelona star Puyol).

With FIFA’s Women’s World Cup having started in Canada on 6 June, the BBC World Service has made a radio documentary about the struggles of the Tibetan women’s soccer team, the Snow Lionesses to achieve international recognition in the face of Chinese opposition. Listen to the programme here as it describes how soccer and sisterhood emerge as powerful vehicles in the struggle for both a Tibetan identity and gender equality.