The National Endowment for Democracy (NED) presented His Holiness the Dalai Lama with the Democracy Service Medal in recognition of the Tibetan spiritual leader’s commitment to advancing the principles of democracy and human dignity. 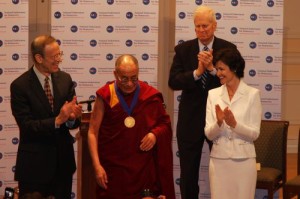 On February 19, 2010 the Dalai Lama addressed an audience at the Coolidge Auditorium, Library of Congress, Washington DC. Commenting on the significance of the honour NED President Carl Gershman said, “The struggle of the Tibetan people to preserve their culture is world renowned.  What is little known, however, is that the Dalai Lama, even before leaving Tibet, sought to implement significant reforms in the system of government. Only in exile was the Dalai Lama able to implement those reforms. Today, the Tibetan community in exile operates under a democratic constitution, with an elected National Assembly and a Supreme Court, with day-to-day powers vested in an elected prime minister. The Dalai Lama himself has often said that it is not enough to oppose Chinese totalitarianism, but that it is necessary to offer a democratic alternative.  Because the Tibetan people have transformed their suffering into a source of moral strength, they have become an inspiration to others who have suffered injustice.”