In our struggle for freedom, truth is the only weapon we possess – His Holiness the Dalai Lama. 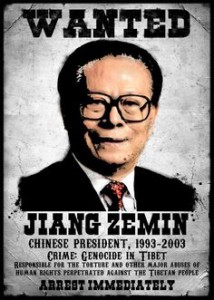 For over 15 years Spanish lawyer Jose Esteve Molto has made it his mission to seek legal justice for the Tibetan people. Universal jurisdiction law allows for perpetrators of serious crimes to be prosecuted in another state. Jose was joined by Alan Cantos of the Tibet Group Comite de Apoyo al Tibet (CAT) in pursuing a case in Spain that accuses five high profile Chinese leaders of crimes against humanity, torture and genocide towards the Tibetan people.

In October 2013, CAT’s efforts to hold certain Chinese leaders accountable for committing serious crimes in Tibet – including crimes against humanity, genocide, torture and state terrorism – made history, when China’s former President Hu Jintao was indicted for genocide and other grave crimes in Tibet. A month later judges ordered warrants of arrest to be issued against former President Jiang Zemin and 4 other leaders; the warrants were issued in February 2014.

In late 2014, Spain – under pressure from China – changed its own laws to ensure the lawsuits could be shut down. CAT will pursue all lines of appeal to prevent these cases from being silenced, but no political act can erase the impartial judicial decisions already made.