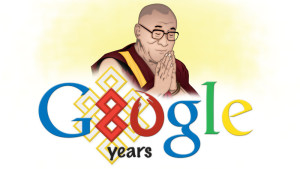 Celebrations to mark His Holiness’ 80th birthday are being planned around the world. One initiative, devised by Mexican Tibet Group – TibetMx – is to persuade Google to host a special #DalaiLamaDoodle on its search page on 6 July.

Hundreds of thousands of individuals use Google search everyday so it will be a great way to help celebrate the life of the Dalai Lama and recognize his exceptional work.

TíbetMx is a group of citizens concerned about Tibet in Mexico. The group is part of the global movement and a member of International Tibet Network.

TibetMx seeks to educate people in Mexico about the systematic violations of human rights that the Tibetan people have suffered from the illegal occupation by China over the last 60 years. Always under the principle of non-violence, TibetMx carries out projects and campaigns through activities such as lectures, documentaries and films, exhibitions among others.

The 80th Birthday of His Holiness the Dalai Lama will be celebrated with several events.

– In Cuernavaca, Puebla, and Querétaro, Tíbet Mx chapters will host the “Tibetan Stories Tour” in the presence of Director, Russell Avery. On 3 July, the series of short documentaries will be screening in Puebla at the Centro Cultural Universitario; on 9 July at Cuernavaca at Cine, Morelos; and on 10 July at Querétaro at Casa Tibet.