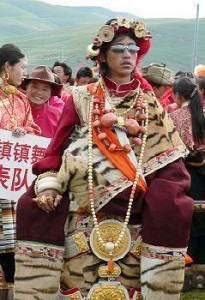 6 the Dalai Lama, alerted by environmental organisations to the upsurge in the smuggling of rare animal skins into China and Tibet, said that he felt “ashamed” that Tibetans in Tibet were wearing the pelts of protected wildlife species, including tigers and leopards (see left, in a photo taken by wildlife researchers in 2005). In a striking show of loyalty to His Holiness, Tibetans in Tibet responded by gathering together in large numbers to hold organised burnings of animal skins and fur-lined clothes.

“An estimated six hundred million yuan [£43 million] worth of animal skins was burnt in eastern Tibet alone [in 2006],” said Lobsang Choephal, a monk who smuggled a videotape of one such event (see below). 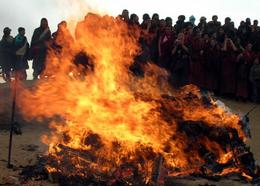 International Campaign for Tibet reported subsequently that the Chinese authorities continued to encourage Tibetans to wear furs to showcase the “exotic” Tibetan culture, even ordering Tibetans at official events or performances to adorn themselves with expensive hats and robes made of endangered animal skins. Further fur burnings took place in eastern Tibet at Tibetan New Year in 2009.