Gu-Chu-Sum, based in Dharamsala India, is an organisation formed by Tibetan former political prisoners. Its name comes from the Tibetan numbers 9, 10 and 3 – referring to September (1997), October (1997) and March (1998) – the months which saw three massive pro-independence rallies in the Tibetan capital, Lhasa.

Gu-Chu-Sum works to raise awareness of the circumstances that lead Tibetans to be imprisoned in Tibet, and urges the international community to put pressure on China to respect basic human rights in Tibet. 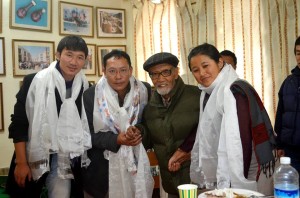 – Accommodate and provide subsidized medical care for former political prisoners who have nowhere to go. Educate former prisoners in computer and language skills.

– Co-ordinate events such as peace marches and campaigns including exhibitions, lectures, talks and interviews with former political prisoners.