The World’s Most Famous Refugee 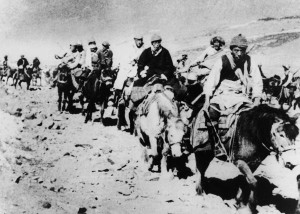 20 June is United Nations’ World Refugee Day. His Holiness the Dalai Lama is almost certainly the world’s most famous refugee, having been forced to escape Tibet in March 1959. He recalled his perilous journey in an interview with CNN on the 50th anniversary of his arrival in India: “Most fearful sort of moment is… (the) night of 17 March 1959…. Soldiers, yes, we can see. We are very much afraid.” He also described the harsh conditions of the Himalayan crossing: “(We had) practical sort of problem, difficulties. High mountain. If you try to walk then… breathing difficulties, but on horse too much cold,” the Dalai Lama said, laughing aloud. “Hand and foot become frozen.”

His Holiness has repeatedly expressed his gratitude to India, saying “I think in this country many other refugees…but we are I think (the) most fortunate and successful refugee community because of (the) government of India’s care and support.”

On 18 June 2015, the United Nations Refugee Agency reported that in 2014 the number of people displaced by war, conflict or persecution reached a record high of nearly 60 million around the world; an increase of over 8 million from 2013.

The video below describes the early days of His Holiness’ arrival as a refugee in India.